It is called a "medicine ball" and it got that title from Prof. Roberts, now of Springfield, whose fame is widespread, and whose bright and peculiar dictionary of terms for his prescription department in physical culture is taught in every first-class conducted Y.M.C.A. gymnasium in America. Prof. Roberts calls it a "medicine ball" because playful exercise with it invigorates the body, promotes digestion, and restores and preserves one's health. ["Scientific American Supplement," March 16, 1889]

Microscopy can be used to visualize the distribution of proteins and enzymes on a cellular level. 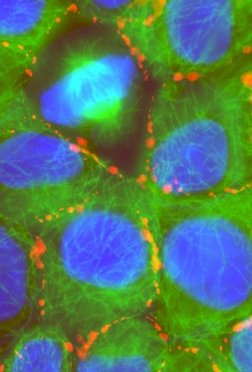 Connexin proteins rank among a group of transmembrane proteins, which incorporate into the cell membrane to form channels. Six connexins are clustered to form a connexon, a structure, with a pore in the center, as one half of the channel. Two connexons in neighbouring cells connect to so called "gap junctions". The opening of this channel is controlled by the cell, and the channel is permeable for low-molecular substances (ions, small molecules, very, very small proteins).

NF-kB (Nuclear Factor Kappa-light-chain-enhancer of activated B Cells) is a transcription factor, e.g. a protein which interacts with the DNA to enhance / suppress the expression of genes.
NF-kB (also sometimes NF-kappaB) is found in almost all animal cell types and belongs to the family of "rapid-acting" primary transcription factors (its activity can be triggerd within minutes). 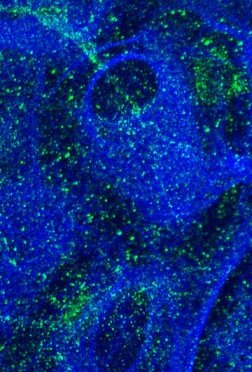 Distribution of NF-kB in a Glia cell culture (control) 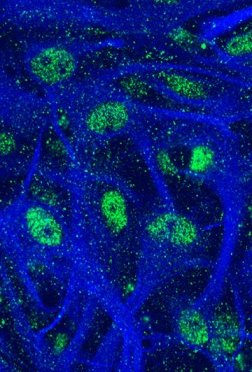 NF-kB trans-location into the nucelus 30 min after addition interferon-gamma.

The Cytoskeleton (also CSK) is a cellular scaffolding present in all cells. It helps the cells to maintain their structure and morphology

Glial Fibrillary Acidic Protein (GFAP) is a protein, first discovered in 1971. It belongs to a class of proteins called intermediate filaments (prominent members are tubulin (which forms microtubules), neurofilament, vimentin, ...), whose primary function is the formation of the cytoskeleton (the "skeleton" within the cytoplasm of all cells). The cytoskeleton is responsible for the shape, intracellular transport and cellular division (e.g. mitosis).
In the adult CNS, GFAP is almost exclusively expressed in astrocytes, and is thus regarded as a very reliable cellular marker.

The most common members of the tubulin family are alpha-tubulin and beta-tubulin, which, as dimers, make up microtubules. Microtubules have a diameter of 25 nm and a length between 200 nanometers and 25 micrometers (which is close to the diameter of the largest eukaryotic cells).
Besides their role as part of the cytoskeleton, they have the notable function of forming the mitotic spindle, used during cell divison to segregate the chromosomes.

Neurons in can be labeld by antibodies against neurofilaments. Neurofilaments, as part of the cytoskeleton, belong to a class of proteins called intermediate filaments which are about 10 nanometer (10nm) in diameter, and are tghus smaller than microtubules. Neurofilaments are expressed exclusively in neurons – and mostly within the axon.

Hepatocyte is the terminus technicus for parenchymal liver cells, derived from the Greek word "hepar" which translates to liver (see also Hepatitis with the suffix "-itis", which, in medicine, has the general meaning "inflammation"). Hepatocytes are the major cell type of the liver (more than 80%), and they are responsible for a plethora of metabolic functions. 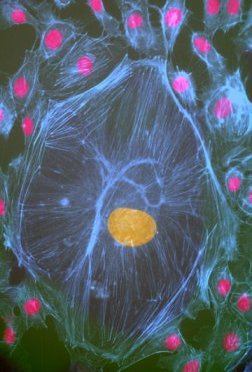 The nuclei are stained red, and tubulin blue. The really large cell (with the yellow stained nucleus in the center) is somehow “transformed”. The smaller cells surrounding it, have a “normal” size.

A cell type that is found in various so called "connective tissue"; the definition is rather difficult, since the term mainly refers to the ability of fibroblasts to synthesize and maintain the extracellular matrix of many organs. The term is a composition of "fibro-" from Latin "fibra" meaning fiber and "-blast" from Greek "blastos", meaning germ, bud. 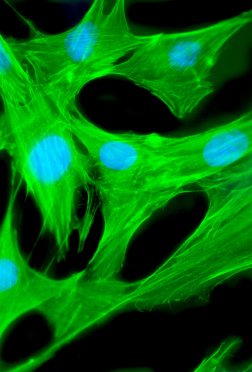 Cell culture of fibroblasts; the nuclei are stained blue and tubulin is stained green.

Just in case — Package Insert: The following links to external web pages are not coincidentally listed here and do not open in a new window! If there are any sites (despite examination at the time of admission), which contain legally precarious or illegal contents, I kindly ask for a note.

Taxonomy » http://www.tolweb.org
Self description: "The Tree of Life Web Project (ToL) is a collaborative effort of biologists from around the world. On more than 4000 World Wide Web pages, the project provides information about the diversity of organisms on Earth, their evolutionary history (phylogeny), and characteristics. Each page contains information about a particular group of organisms (e.g., echinoderms, tyrannosaurs, phlox flowers, cephalopods, club fungi, or the salamanderfish of Western Australia). ToL pages are linked one to another hierarchically, in the form of the evolutionary tree of life. Starting with the root of all Life on Earth and moving out along diverging branches to individual species, the structure of the ToL project thus illustrates the genetic connections between all living things."

Conflict Research Center WAS » http://www.conflict-research-center-was.de/
This site is mainly about the concepts of meta-theory and offers some intriguing insights into medicine, biology, physiology and psychology.

The Salk Institute » http://www.salk.edu
Research institute for basic research (biology, medicine) at the Pacific coast (San Diego, California), founded by the discoverer of a polio vaccine, Dr. Jonas Salk (there are actually two; the oral vaccine was developed by Dr. Albert Sabin). Main fields of research are: Molecular Biology and Genetics, Neurosciences and Plant Biology.