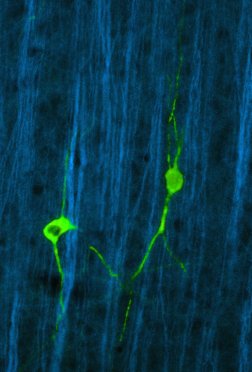 The numbers of neurons varies extremly between species: the common fruit fly has about 100.000 neurons, whereas it is estimated that the human brain has about 1014 (100 billion) neurons. However these are estimates, nobody ever counted all the neurons, or delivered a plausible concept how to estimate their number.
But, just to remember you, how wrong sience can be: it was printed in almost every biology / medicine text book, an often used question in tests, and broadly regarded as a fact for decades - that the human genome has about 100.000 genes. Until of course, the genes where actually counted: turns out, their number is about +/- 25.000 in humans and +/- 30.000 in mice.

The main cell types characterizing the CNS are essentially neurons and glial cells, whereby the first are regarded as the cellular substrate of the cognitive abilities of the CNS. The basic morphology of a neuron consists of three main parts:

It was long postulated, that in the adult mammalian brain, no new neurons are "born". However, it has been shown in humans and in mice that this dogma has been wrong.

"This study was undertaken to investigate whether neurogenesis occurs in the adult human brain, in regions previously identified as neurogenic in adult rodents and monkeys. Human brain tissue was obtained postmortem from patients who had been treated with the thymidine analog, bromodeoxyuridine (BrdU), that labels DNA during the S phase. Using immunofluorescent labeling for BrdU and for one of the neuronal markers, NeuN, calbindin or neuron specific enolase (NSE), we demonstrate that new neurons, as defined by these markers, are generated from dividing progenitor cells in the dentate gyrus of adult humans. Our results further indicate that the human hippocampus retains its ability to generate neurons throughout life." [Eriksson PS, Perfilieva E, Bjork-Eriksson T, Alborn AM, Nordborg C, Peterson DA, Gage FH.; Nature Medicine 1998 Nov;4(11) Source » PubMed ]

The function of the brain is based on the ability of excitable cells to trigger and transmit electrical impulses. Against this background, it is maybe surprising, that the electrically excitable cells - the neurons - are numerically outnumbered by the so called glial cells within the central nervous system (CNS).

The first to describe them was the German pathologist Rudolf Virchow (1821 - 1902) in 1846 He discovered cells in the CNS, which showed no features of neurons. He assumed that it was this to be the connective tissue of the brain and described it as "Nervenkitt". Virchow assigned to two major roles to these cell types:

A long time it was not recognized that the so called "Nervenkitt" was populated by different cell types. Only the development of new staining techniques (metal impregnation) in light-microscopy allowed further differentiation. Three different glia cell types have been found:

In recent years it has become increasingly clear, that these glial cells also take over other functions in the brain. They may communicate in a sort of network which complements and or supports the neural network. Likewise, the clarification of the ontogeny of glial cells is still a topic of research in neurobiology. 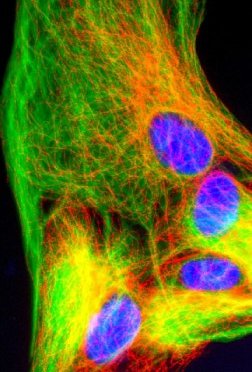 Astrocytes belong to the 3 types of glial cells in the CNS (the others are microglia and oligodendrocytes). Astroglia is used as a synonym. These cell exhibt usually a star-shaped mmorphology, with many processes extending from the soma. Astrocytes can be identified histologically since they express the intermediate filament glial fibrillary acidic protein (GFAP).
Astrocytes perform a plethora of functions (and the list is constantly growing:
biochemical support of neurons and other cell types,
support of endothelial cells which form the blood-brain barrier,
a major role in the repair and scarring process of the brain and spinal cord following mechanical / inflammatory injuries,
a "guidance" for growing neurons / axons during the development of the brain.

Previously in medical science, astrocytes have not been given an active role in the information processing activity of the brain, but this view has recently been challenged.

Oligodendrocytes are a variety of neuroglia cells within the central nervous system. In comparison to astrocytes oligodendrocytes are more gracile and form less cell ramifications. Their image in a microscopic cross section is reminiscent of trees with only a few branches - hence the name. Their cell processes surround the axons of nerve cells and isolate them from the environment. In analogy to the Schwann cells of the PNS

The cell body (not the branches) of the oligodendrocytes exists predominantly in the white matter, less frequently in the gray matter.

The degeneration of the myelin sheath, which is formed by oligodendrocytes, is a characteristic morphological change in the disease multiple sclerosis. 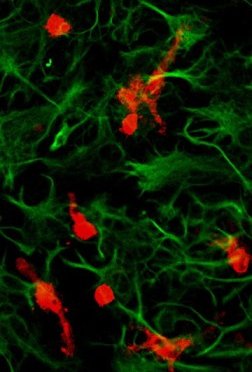 The name microglia was first (1920) introduced by Pio del Rio-Hortega (1882 – 1945). Since the function and ontology of microglia was unknown at that time, and furthermore, the cells of the brain where divided into two types: neurons and “others”, which were termed by the generic expression “glia” (e.g. astroglia and oligodendroglia ), the term microglia was a reference 1. to their shape 2. to their obviously non-neuronal characteristics.

Microglia are a cell type, that is only found in the CNS (Central Nervous System; per human definition: brain and spinal cord). Usually microglial cells are in a so called ramified state, in which they are immunologically inactive. However they can be “activated” via various triggers (all caused by some kind of brain injury):

Once activated, microglia assume an amoeboid (round, oval) morphology, and display a behavior similar to macrophages. They act as antigen-presenting, phagocytic, and cytotoxic cells, all three a hallmark of cells of the immune system.